Being an adivasi, a woman and being born in a region desired by greedy multi national companies does not serve one well. That is the story of Hidme and many more like her in the regions of Bastar, Chattisgarh. Kawasi Hidme was a young girl, full of energy from Borguda village in Sukma, Bastar region. She helped her widowed aunt till a small piece of land. The rice grown was just enough for them and Hidme would, during the season, sell Mahua in the local market. Like every girl of her age, she would be excited about the occasional fairs from where she can buy colourful bangles and other items which were otherwise not available in the local market.

In January 2008 just after harvest, as in previous years, a fair was organised in Ramram, the nearby village. Kawasi accompanied her aunt and her other cousin sisters to the fair and to buy ribbons andchoodis. There she joined a group of other tribals who were dancing and singing. Having danced vigorously, she soon became thirsty and approached the nearby hand-pump for water. But as soon as she held the pump, someone very forcefully grabbed her. She looked up angrily and was shocked to see Police personnel. They had surrounded her and began dragging her by her hair towards their vehicle parked outside the fair. With hands and feet tied, she was thrown on the floor of the truck and driven to the Police station.

This was just the beginning- the start of the atrocities that were to be perpetrated on Kawasi Hidme for the subsequent seven years or so. As the staff at one police station would satisfy themselves, she would be sent to another. Repeated torture resulted in a death like situation for her. The policemen however, got apprehensive that she might die in the station itself. That would be a major problem. Her detention had to be formalised and she had to be sent to prison. This was not something uncommon for this area- adivasi girls like Hidme were detained and tortured for months on end and would ultimately be falsely charged under draconian laws such as the Chattisgarh Public Security Act, UAPA, etc.

However before sending her to the prison, the formality of producing her before the court remained. Kawasi’s condition was such that she had to be admitted to the hospital. It was only after a few days that she was produced before the local Magistrate. The Police had conveniently accused her of an offence that related to the murder of 23 CRPF personnel and the Magistrate remanded her to the Jagdalpur prison. On reaching the prison, the excessive physical and possibly sexual torture ultimately paid its toll and her body suddenly ejected her uterus. She bled profously. Horribly scared, she somehow attempted and suceeded in putting her flesh back into her body. 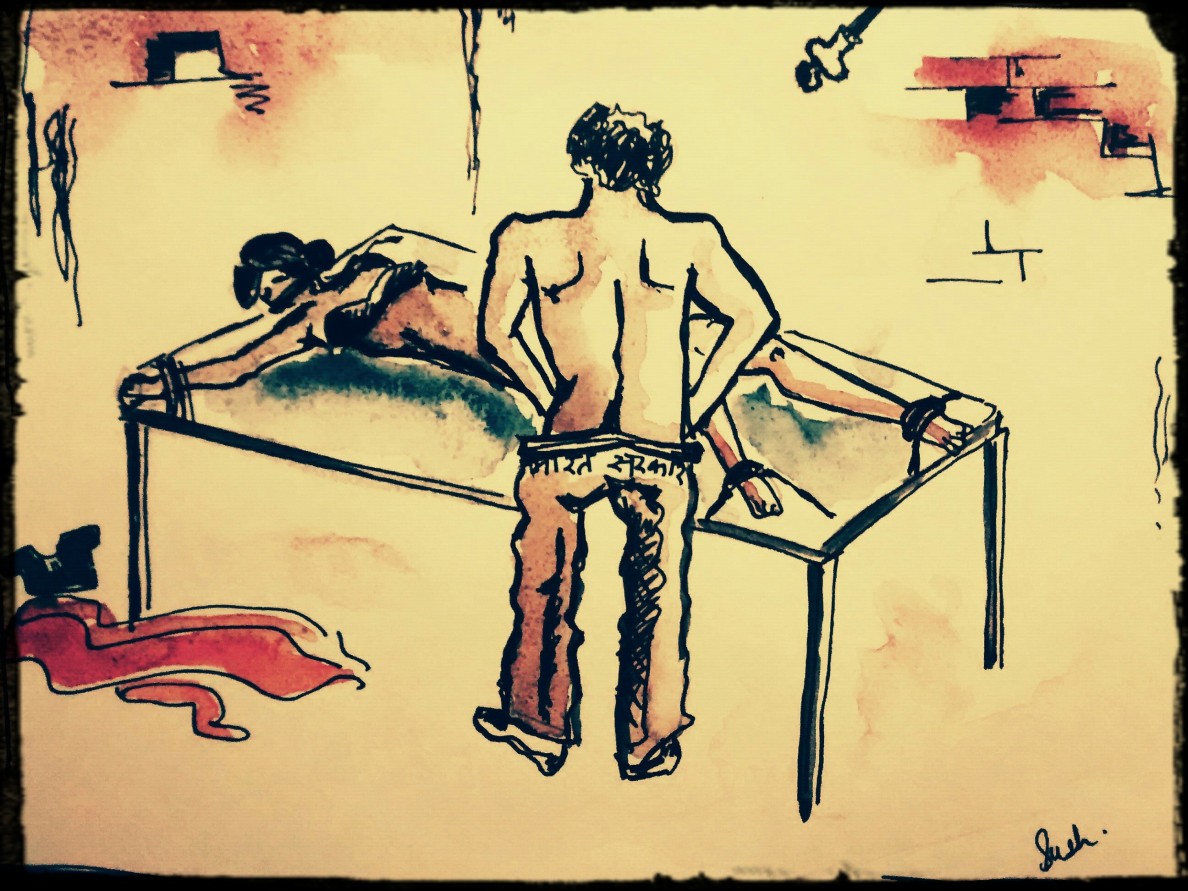 Till then, she couldn’t share her experience with anyone, but now in prison she would be comfortable to talk to the other Gondi speaking women inmates. The next day as her uterus was again thrown out of her body, Kawasi decided to cut it off. She asked an inmate for a blade and when all the girls had gone out of the barrack, she sought to operate herself so as to end the pain. As she was about to act, a girl entered the barrack and screamed on seeing the bleeding Hidme. The other women inmates gathered. The blade was taken away from her and the jailor was called, who sent her to the city civil hospital for treatment. After a surgical operation at the hospital she was brought back into jail.

In court, the fabricated case against Kawasi was not progressing. The Police had mentioned two women and two policemen as witnesses. The two women never came to depose before the court and the two policemen denied having any information about her involvement. The evidence put up was itself suspicious at face value. The offence in which Kawasi was alleged to be involved, took place on the 9th September 2007. Statements of police personnels (with ‘remarkable memories’) were recorded on 5thDecember 2007, mentioning names of around 50 Naxalites supposedly calling out to each other. This list did not contain Kawasi Hidme’s name. However after 15th December 2007 when the police personnels added a few more names, her name suddenly appeared in newly recorded statements. And finally in court they denied her involvemnet.

Soni Sori, an adivasi teacher, was also in prison during this period and could interact with Kawasi. Soni Sori had undergone a similar treatment in police custody. She was administered electric shocks and stones were inserted in her private parts. After her release Soni Sori had informed human rights activists about Hidme’s condition who in turn, with sympathetic lawyers, started raising their voices for Kawasi. One such lawyer argued before the Court that as all the witnesses were complete, orders to release Hidme should be given. The judge replied that since she had already spent seven years in jail, there should not be a problem in spending a couple of months more! So Hidme stayed incarcerated for many more subsequent months. Finally in late March 2015, as none of the charges against her could be proved the Court ordered her release.

On the date of her release, Soni Sori and her nephew, Linga Kodopi went to receive her from Jagdalpur jail. When Linga took her back to her village, her friends failed to identify her and as she called out to each one of them, they started weeping. Though she was now free, her body was almost completely wasted. She had undergone multiple operations for gallstones. And each operation resulted in further exhaution. The mental injury is almost beyond repair. She regularly faces depression and sudden mood swings. On the other hand, the IG of Bastar, Kalloori has planned to fabricate Kawasi in a further case as she continues to speak of her violations and join Soni Sori in their fight against these injustices

This is not just the story of Kawasi Hidme, but rather the story of thousands of Adivasi women and men incarcerated for longest years of youth and vitality.The hard question we need to ask here is, who is going to compensate for their lost years? In the absence of legal aid, the torture these young women and men have undergone are never proved . The even more shocking part is that we do not hear such stories in the mainstream media. Soni Sori was one of the few women whose voice did reach mainstream media, the reasons being her own courage and the extent of gruesome torture she underwent. Though among aware citizens, it is not unknown that the Police frame adivasis and vulnerable people in regions like Bastar in false cases by branding them as naxals, but serious documentation on it especially when it comes to women still remains minimalistic. But all this fades in the midst of the footage that mainstream media devotes to coverage of the IPL, paid-news reports or events that do not concern us. This has created an illusion in the minds of our youth that a good life means a good job and abundant money with no concern for society at large. The few courageous women who decide to stand up against the mighty and powerful state apparatus face hostility at every step of their work. Recently when Soni tried to help Bhima Madkam, a local injured in a police firing, from Madenar village in Bastar to file a complaint, the police started harassing and threatening her saying that they will send her back to the jail by getting her bail order cancelled by the Court on grounds that she is ‘instigating people against the State’.

Apart from investigatng the case and arresting people, the police in these areas also assume the role of delivering justice. The growing impunity they enjoy is disturbing. The power that comes from holding the gun with absolutely no accountability is indulging. They assume the role of the overarching patriarchal figure who under the pretext of ‘protecting’ society, extracts ‘small’ (sexual or otherwise) favours, ‘teaches’ the accused a lesson and gets away easily unnoticed. Unless we broaden the discourse and dialogue on these issues, there is faint hope that anything is going to change for the better.

Hidme’s question keeps haunting us: “I was never involved in any Maoist activity… What was my fault?” We, as concerned citizens, have to decide if we are prepared for more such questions or are we going to stand up and challenge these injustices?

(Note : Support for the facts related to Kawasi Hidme’s case has been taken from Jagdalpur Legal Aid group’s lawyer, also a large part has been translated from information available in Hindi on activist Himanshu Kumar’s facebook page. The relevance of Kawasi’s story in our lives is becoming more important than ever before, hence I chose to talk about her story. All views expressed are mine)

Error: Twitter did not respond. Please wait a few minutes and refresh this page.

Killings in the name of war